On Saturday, February 22, I flew to La Guardia Airport, New York, in mid-afternoon.  Hopped on the Q70 bus to Jackson Heights, then the E train into Manhattan.  Walked through Times Square, teeming with visitors, to 229 W. 43rd, a building I knew very well in its original version, as home of The New York Times.  But about a decade ago the paper moved around the corner, into a new building on Eighth Avenue, and the building had been recycled into offices, including the headquarters for Michael Bloomberg’s presidential run.  In December, daughter Robin took a senior comms job with the campaign, and she gave me a quick tour of the operation.  She had a lot to do, so I was in and out in 20 minutes or less.

Above, the view from above: lower Manhattan and LaGuardia Airport. Below left, Robin at the Bloomberg HQ, and your scribe writing “Go, Mike, Go” on a wall. Bottom, a portion of Matteo Pericoli’s splendid “Skyline of the World,” a mural I helped (in 2006-07) get commissioned and installed in JFK Terminal 8. Proud to have played a small part. I smile every time I see it! 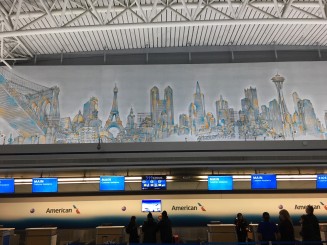 Walked south to Penn Station and onto a Long Island Rail Road train to Jamaica (the district in Queens, not the island), then the Airtrain to Kennedy Airport.  Hopped on the Silver Bird to London, landing Sunday morning at 7:45.  It was a repeat of four weeks earlier: onto the Heathrow Express then Tube (and that day a red bus) to Scott Sage’s house.

I was actually bound for Cambridge, my 25th visit, but it was Scott’s birthday and I surprised him with Dunkin’ Donuts (purchased the day before in Manhattan), and a homemade birthday hat.  His swell wife Caroline and daughter Eva were away, but Scott’s parents, Jeff and Patty, were visiting from Texas.  I had not seen them for more than a decade, and it was fun to catch up.  The doughnuts stayed in the box – Patty made blueberry pancakes.  Scott and daughter Sadie both had bad colds.  An hour in, Scott’s father-in-law Michael arrived; I had not seen him in several years, and it was fun to catch up with him, too. 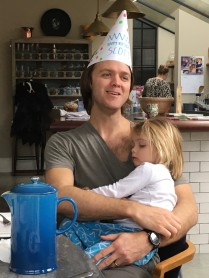 I peeled off just before noon, bus and Tube across town to Liverpool Street Station and north to Cambridge.  Arrived 2:30, short bus ride to the center of town, and a short walk to Sidney Sussex College, my usual digs.  For years I had enjoyed some very fancy and large rooms, but the year before and this time I had a tiny room on the top floor, with the shower and toilet a floor below – it was not exactly a garret, but pretty close.

Above, the view from my garret; below, the chapel at Sidney Sussex College.

Grabbed a sandwich from the supermarket across the street and took a tonic nap.  At 6:00, processed into the college chapel for Choral Evensong; I had not heard Sidney’s celestial choir for a couple of years, and it was nice to be back.  After the service, per tradition we repaired to the Old Library for a glass of wine and conversation.  I spoke with Tristan, a Ph.D. history student, and with Brett, the college chaplain and Devin McLachlan, the guest preacher.  He was an interesting fellow, Chicago native, Harvard divinity graduate, now an associate at Great St. Mary’s, the town’s large Anglican church.  In previous years I had been invited to head table in the dining hall, but not this time, so I headed back to the sort-of-garret, changed clothes and walked two blocks north to the Maypole, an agreeable pub I found on the 2019 visit.  An Italian family, Castiglione, owned the place, and the menu was half British favorites and half Italian dishes.  I tucked into a wonderful big bowl of pasta, a Sicilian recipe called Boscaiola.  Yum.  Asleep by 9:30.

Up early Monday morning, couple of cups of instant coffee in the room, down the stairs for ablutions, suited up, and off to breakfast.  The historic college dining hall was closed during the day for a major construction project, so breakfast was in a modern and well-lit hall.  Walked across town to the Judge Business School, set up office as I always do in the second-floor common room, and worked the morning.  Paused for lunch, then a short walk around campus.  From 4:30 to 5:30 I delivered a talk to 45 engaged students in Jochen Menges’ MBA leadership class (Jochen has a chair at the University of Zürich, but also an appointment at Cambridge).

Above left, Trinity Street, and the front window at Heffer’s, Cambridge’s famous bookstore. Below, detail above the front gate at Emmanuel College. At bottom, St. Botolph Church, built 1320, and its chalked door (see explanation of “chalking the door” in the December post). 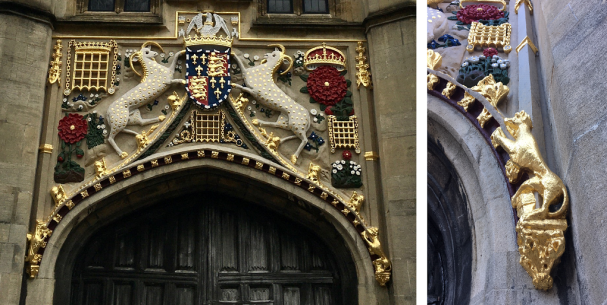 Walked back to college, changed clothes, and by long tradition ambled to the historic Eagle pub on Bene’t Street, where your scribe joined an elite group of former patrons: the creator of Pooh, Piglet, and Tigger (A.A. Milne), the pioneer of our knowledge of motion (Newton), and the co-discoverers of DNA (Watson and Crick), among others.  Thirst slaked and feeling a bit smarter, I walked a few blocks to Loch Fyne, a wonderful seafood restaurant, for dinner with Jochen.  I had not been there in some years, and it was swell to be back.  We had a fine meal (poached smoked haddock for me) and great conversation.

Above, Jochen’s classroom during a creative exercise. Below, ya gotta love candor: a poster advising men to check their testicles regularly!

Wolfed down breakfast Tuesday morning and walked briskly the 1.3 miles to the train station and onto the 8:48 to London.  Got off at Tottenham Hale, onto the Tube, and was soon at Baker Street.  Ambled to London Business School, my 21st visit, met Wani, Marianna, Trish, and Rebecca, my hosts from the school’s Marketing Club.  A winter-time talk to that group has become a firm tradition.  It was a big group, also engaged, lots of great questions. 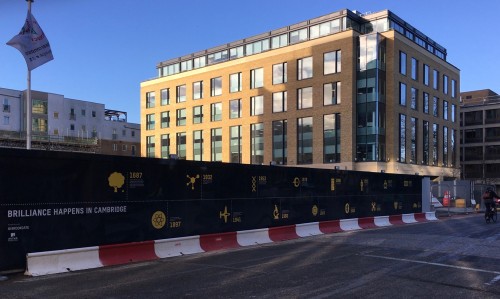 Near the railway station, a real-estate developer trafficking on Cambridge’s brainpower: among other things, the examples celebrated the world’s first jet engine, Bluetooth software, and in-vitro fertilization.

Had some good discussions after the preso, best of which was another (third time in six months) encounter with a student who had heard me speak at a previous school.  In this case it was Mattias Liu, a young Canadian who met me at McGill in 2015.  I really enjoyed the chat with Mattias, because he told me that he recalled my career advice – I end almost every talk urging students to find a job that fills them with mission, purpose, and passion, prioritizing that over money or a name-brand firm.  After earning his Masters at LBS, he went to work, like so many bright business students do, for a bigtime consulting firm.  “It didn’t really suit my personality,” Mattias said, and he now loves his job, working for the big brewer Carlsberg in Copenhagen.  Also had a good, and very candid, chat with Heidi, a former Boeing engineer who had worked on the 737 MAX; she was highly critical of the “business decisions” that Boeing had taken to sell that jet.

Grabbed a quick lunch at Pret a Manger, hopped back on the Tube and rode to Kensington High Street and a visit to the way cool Design Museum.  In late 2017, I visited to see winners and finalists in their annual design-award competition, and the 2019 show was about to end.  Some cool stuff in six categories: graphics, products, fashion, transport, architecture, and digital.  And some stuff that looked like it won because it was trendy and not necessarily innovative, but maybe that’s just the view of an old critic!

Above, genuine innovation: a soundless, wearable breast pump, and stackable chairs made from plastic-factory waste. Below, an electric scooter produced on a 3D printer (everything except the motor and fasteners were made that way), and a finalist in the graphic section, rebranding of an English football team, the Wolverhampton Wanderers.  At bottom, the Xperia touch, a device that merges projection and touch screen capabilities, so that any flat surface becomes an interactive screen (my middle finger is pointing at our house in a Google Earth close-up). Whoa!

Walked south to Earls Court, then back on the Tube west to Hounslow, the suburb just east of Heathrow.  My flight was early the next morning, so I wanted to stay close to, though not at, the airport.  My no-frills Ibis Budget Hotel was right across from the office building that for years was the European HQ of American Airlines, and looking across the street brought back lots of memories of meetings in that place: fighting with Gulf Air over revenue splits; advertising presentations, PR-strategy sessions, and more (the airline now offices in British Airways’ headquarters on the other side of the airport).  Checked in, took a short nap, worked a bit.  Hounslow has a huge South Asian population, so abounds with Indian food.  For three consecutive years a decade back, I had eaten at a place called Desi Flava, a mile from the hotel.  It had changed, and was now called Takaa Tak, which is Hindi slang for “excellent” or “perfect.”  My kind of place.

Above, for obvious reasons, I’ve long admired travel posters, and for several years the Great Western Railway has produced these lovely throwback editions that merge an century-old illustration style with their most modern trains. Wonderful! Below, scenes at Takaa Tak.

From the front door, it looked promising, especially the patron composition, almost 100% South Asian.  While waiting for a table, a happy, slightly drunk patron leaving the restaurant caught my eye, and in a minute he was giving me dap, hugging me, asking small questions.  Good to engage.  Tucked into a nice meal, two vegetarian dishes, augmented, as I always do, with a small bowl of chopped green chilies.  Walked home, clocked out.

Up way early Wednesday, onto the Tube to the airport, a 787 to Chicago and back east to Washington.  Henry and MacKenzie on the leash by 7:00.  A short trip, but a good one.