Atlanta for the Day, Then Alohas in Hawai’i

A week after judging in Texas, fall travel began in earnest.  Early on Monday, September 9, I flew to Atlanta for a one-day consulting assignment.  High point was a wonderful T-t-S with Ronesha, a Lyft driver who carried me from the big airport to a meeting a few miles away.  She was the definition of a go-getter, undeterred by some hard life experiences.  Ronesha was driving Lyft as a second job, to help with a down payment on her family’s first house; and she was finishing her bachelor’s degree in psychology, “hoping to go on to get a Ph.D.”  We finished the chat with a yak about her oldest child, who had finished high school and was studying to be an aircraft mechanic.  She sounded a little tentative, almost apologetic that he wasn’t in a regular college.  “Wow,” I replied, “that is a great choice,” I said, adding that I knew something on the topic from a lifetime in the airline business.  It was a fine start to a busy week.

Two meetings later, it was already 5:00 PM, time to get back to ATL, then onto a big Delta 777 to Los Angeles.  A long ride, but it went quickly, with movies and a short nap.  Our 72-minute wait for a gate at LAX was a reminder that we Americans do not have enough aviation infrastructure.  Airlines get the blame, but U.S. airports are public entities.  Sigh.

Sigh again after we deplaned, a massive traffic jam on the airport access road (= not enough road infrastructure), another 30 minutes to get two miles to the hotel.  The original plan was to zip down to nearby El Segundo for dinner at cool Mexican place (Jack’s friend Matt works for the company), but it was late in L.A. (and three hours later at home) so I ambled 150 feet to a McDonald’s for a Big Mac.  Soon asleep.

But awake way earlier than I wanted, a reaction to the three-hour time difference; one of life’s mysteries is how I can cross six time zones over the Atlantic – as I would six days hence – and be totally fine, but get messed up crossing the U.S.  In any event, I was awake before five, so headed to the hotel gym and pounded out 20 miles.  Tonic.  Grabbed a cinnamon roll and milk at a nearby gas station, back to the hotel room, then out the door and back to the airport for the second stop of the trip, Honolulu, Hawai’i.  I hadn’t been for ten years, and was excited to be heading across the Pacific.  I was traveling west to do a day of leadership training for Hawaiian Airlines, so was on one of their Airbus A330s.  Service was so good; their flight attendants are almost all from Hawai’i, and their aloha hospitality is genuine, warm, and at the top of the charts for any carrier anywhere in the world.

Another wait for a gate on arrival at HNL, 40 minutes, but was in my hotel room before two.  Changed into my 20-year-old aloha shirt, light pants, and sandals, and set off for lunch at the nearby Ala Moana mall.  The food court had a bewildering array, including lots of Asian choices.  Settled on spicy pork ramen, slurping happily away.  The mall, loaded with all the upmarket brands (Fendi, Prada, you gotta) was teeming with tourists from all over Asia, especially single Japanese women in small groups.  Young Japanese women are either not getting married or marrying later, and they use their incomes to travel.  A lot.

Above, hotel room views, pick the one you like better: Los Angeles Airport, or Honolulu? Below, lunch and flora. 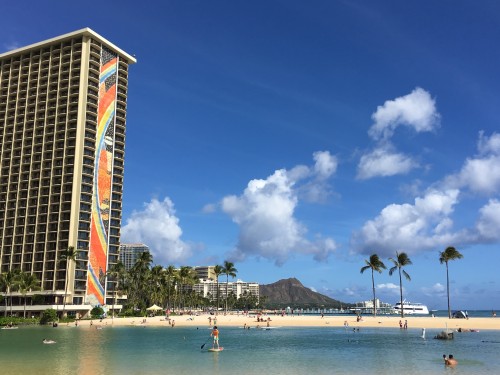 Sustained, I headed a mile to Waikiki for a walk along that storied beach.  It was such fun to be there, first time in 20 years.  I smiled, looked upward to heaven, and said a prayer of thanks when I passed Fort Derussy, the Army recreational facility in the middle of the beach; this was where my dad relaxed with his field artillery outfit in 1944, between Pacific battles on Kwajalein and Tinian.  Last stop along the beach was the fabulous Royal Hawaiian Hotel, “the Pink Palace of the Pacific,” opened in 1927.  It is like a museum.  We Brittons stayed there in 1999, and I wished I were billeted there.  Such a cool place.  Here are a few scenes:

Above, the main entrance to the “Pink Palace”; below, a lobby table and ceiling 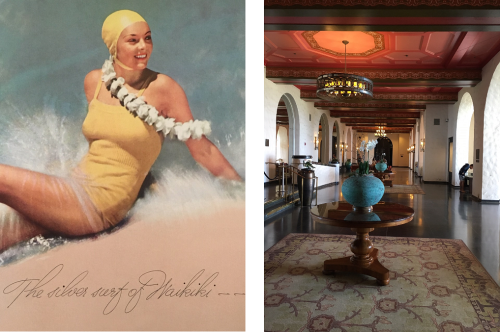 Above, in 1935, Matson Line, the shipping company that carried people from San Francisco to Hawai’i before the airplane, commissioned a prominent fashion photographer to capture scenes from Waikiki; at right, a secondary lobby closer to the beach. Below, the hotel on opening night, 1927.

When I hopped on the #22 bus to head back to my simpler hotel, I tendered the driver $1 for a senior fare.  “Did you bring the senior with you?” he asked.  “Man, you made my day,” I said, “I’m almost 68.”  The bus was packed with a mix of locals and visitors.  Took a quick shower, drank a splendidly cold beer, and at 6:15 a former American Airlines colleague, Jon Snook, now COO of Hawaiian Airlines, rolled up in his Tesla.  I hadn’t seen Jon in a decade, and we had a great chat for two hours, over dinner at a very posh restaurant right on the beach.  Way fun.  Lights out at 9:30, and finally a good sleep.

Above, you don’t find pounded breadfruit at a convenience store on the mainland; below, the view from our Tuesday dinner table.

Up at 5:30, to the gym, then breakfast, then out to Hawaiian Airlines Cargo, my host group.  Met leader Brad Matheny, set up my show, and had a quick tour of their facility.  In the 50th State there are no roads between islands, so the airplane is an important part of logistics (ordinary white bread, for example); they also carry a lot of goods to and from the islands from cities in East Asia and the South Pacific, and the mainland U.S.  At nine, it was time to stand and deliver, three back-to-back sessions.  After Brad introduced me in the first session, two women came forward and, in true Aloha spirit, placed two garlands around my neck.  I wore them all day.  The three audiences were engaged.  Wonderful people, and so diverse.  The local population is probably the most culturally and racially varied of any American city.  Looking at the human rainbow, I was reminded of a great article I had read a few months earlier, “Want to Be Less Racist? Move to Hawaii.”  So interesting. 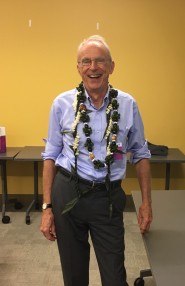 The day sped past.  At 5:30, we hopped in Brad’s Mini Cooper and zipped back to Waikiki for dinner at Roy’s, a well-known spot.  One of Brad’s directors, Dana, met us, and we had a swell dinner and great conversation.  They are fine people, at a fine airline.

Up early again Thursday, back to the airport.  My flight was not until two, but I had fixed up a short meeting with another former AA colleague, Brent Overbeek, who leads Hawaiian’s revenue management and network planning team.  My Lyft driver was another joy.  Henry was 72, and from Vietnam.  He joined the South Vietnamese Army in 1966, age 19, and because he spoke English he did a lot of translating, all until the South collapsed in 1975.  Henry was jailed for two years.  When released, he knew he needed to escape, “because if I stayed they would have treated me like an animal.”  So he hijacked a fishing boat (“no one got hurt”), put his wife and son aboard, and sailed three days to Thailand.  They arrived in Honolulu in 1977, but Henry lived most of the intervening years in Southern California.  Quite a story.  E pluribus unum. 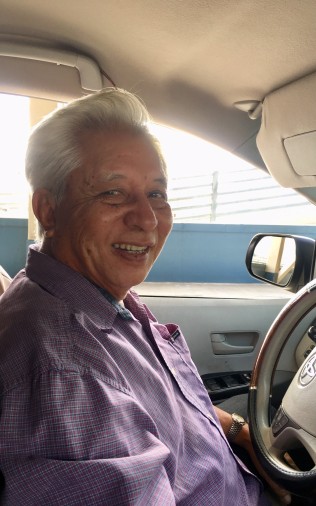 After yakking for 45 minutes with Brent, I walked across parking lots and ramps to the airport, worked for several hours in the Admirals Club, and hopped on Hawaiian Airlines flight 90 to Boston; it’s the longest domestic flight in the U.S., but it went pretty fast, and even bolt upright I slept about five hours.  Quick connection in Boston to jetBlue, zippy flight to Washington, and was hugging the dogs by 8:55 AM.

Above, my ride east to Boston; below, a wall of Massachusetts innovations and firsts in Boston Logan Airport. 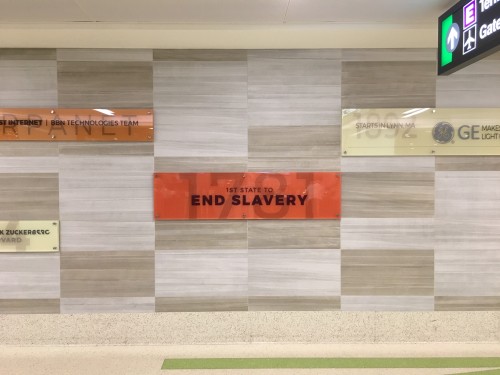