The Farmington Canal Greenway, a wonderful bikeway on a former railway line, and adjacent to a canal dug in the 1820s

Travel in the second half of 2019 began with a flight to New York on Wednesday, July 10.  I was bound for New Haven, Connecticut, to spend a couple of days with son Jack and his girlfriend Reed, so decided to detour to New York (sorta weird that we live only 200 miles from The Big Apple, but I only visit once a year; regular readers know it’s not a fave place).  Landed at LGA, hopped on the jammed Q70 express bus to the Jackson Heights subway station in Queens (it was free until September 2; almost nothing in New York is free!), then the E train into Manhattan.  So speedy, so much better than a taxi, not least for the rainbow of humanity on New York public transit.

I was due to meet longtime airline friend Pete Pappas at his apartment on Central Park South at noon, and had time, to zipped into a Starbucks, one of my usual away-from-home offices, for a small cup and some work.  Ambled a few blocks north, goggling at the many new pencil-like apartment high-rises that are springing up (and thinking “I hope they get the foundation engineering right”).  Met Pete, and as a bonus his wife Ivie, in the lobby of their building.  Visited briefly with Ivie, who I had not seen in many years, then Pete and I peeled off for an agreeable lunch at an Italian place nearby.  Pete’s older than me, with way more airline experience, so it’s always enlightening and entertaining to spend time with him. 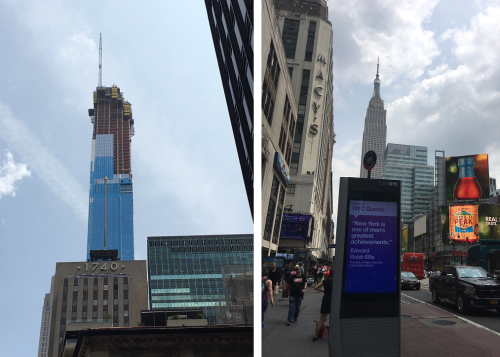 At left, one of the new pencils; right, a welcome new addition to the NYC streetscape, signboards that display bus arrivals at that stop, along with advertising. Unhappily, the bus info rotates into view less frequently than it should. At bottom, wonderful old station signage on the subway platform.

We parted at 1:45 and I hopped on a southbound train, then bus across 34th Street to the new Hudson Yards residential and commercial development, built atop former railway land (the “yards” part) just by the river.  It was pretty much as the architectural critics described it: for the wealthy.  Been there, done that, hopped back on the subway, and another train to 23rd St. 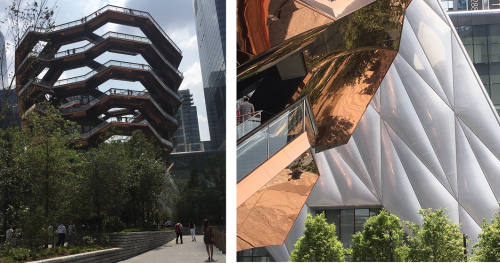 Walked east to Poster House, the nation’s first poster museum (they’re common in Europe, and I visited the Danish iteration in Aarhus in February), opened just a month earlier.  I read about it in a recent issue of The New Yorker, after I had committed to the trip, so decided to visit.  Wowie, I was excited as I walked in, and the staff were still glowing with excitement too.  The magazine article described their first two exhibitions, and I was much more interested in the poster art of Alphonse Mucha, a Czech-born artist who became famous in Paris in the late 1890s.  Here’s a good, excerpted summary from the opening interpretive panel:

The stylized, confident women … changed the landscape of modern advertising and made him the most important graphic designer of the Art Nouveau period … The image of this Nouvelle Femme (New Woman) became a staple in Mucha’s work, replacing the submissive advertising ladies of previous years … his advertisements were reprinted as home décor, blurring the line between fine and commercial art.

Mucha’s fame skyrocketed after a serendipitous opportunity to make posters for the promotion-obsessed actress Sarah Bernhardt; a Paris printer contracted him to create images to sell everything — below, cookies, bicycles, and Monaco, and at bottom, Champagne. 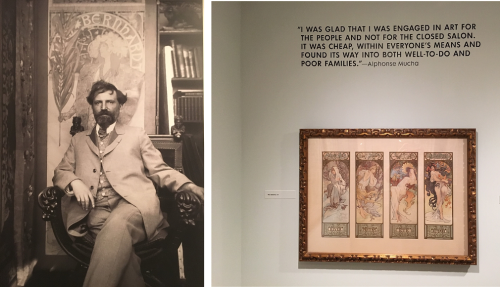 At left, Mucha; right, when he was not drawing commercial art, he created art posters, and the quotation in the photo says it all.

The other exhibit was of two German poster artists who formed a firm called Cyan; they actually got started in the former East Germany, and their stuff was, well, complex.  Mucha rocked it.  Before leaving, I asked the staff about the permanent collection (9,000 works, which will mostly be exhibited online), and the next special exhibit (hand-painted movie posters from Ghana).  Just way cool.

I’ve often described New York as at the extremes of best and worst, and after seeing some of the best, the scene on W. 23rd St. smacked me back to the worst: a man sleeping next to his bagsful of aluminum cans and bottles, perhaps his primary means of support. Walked a few more blocks, past the venerable Flatiron Building, then onto the 6 Train north three stops to Grand Central Terminal. 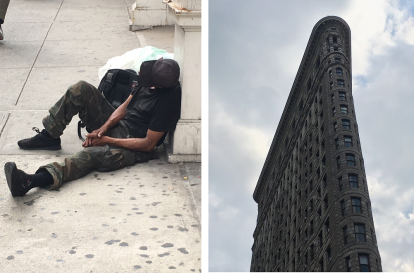 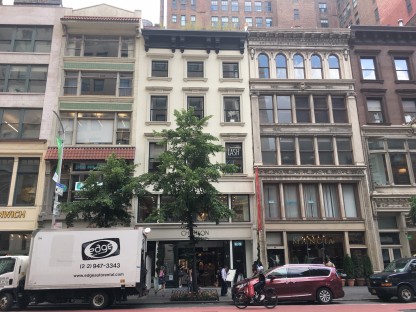 When you see a low-rise landscape in Manhattan, you stop a take its picture! This is W. 23rd St., between Fifth and Sixth avenues

Hopped on the Metro North New Haven Line, and in two hours was hugging Jack at Union Station.  We motored a mile west to Tandoori, a simple Indian place in a former stainless-steel diner.  Ate well.  Back to his apartment, hugged Reed, met her Huskie Kora, yakked for a bit, and promptly dozed off. 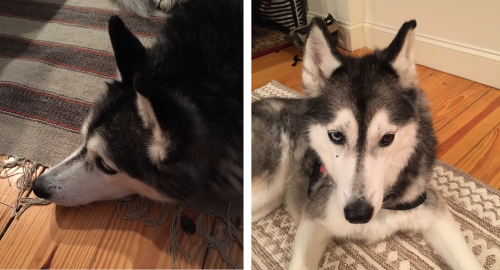 Up at six with the three of them, put Kora on a leash, and walked east to Wooster Square, a pleasant urban park.  Like our Henry and MacKenzie, Kora loved to chase squirrels.  She weighs about the same as both of the terriers, so the traction was equivalent, but still pretty hard on my knees!  Back home, cup of coffee, bye to the three, and out on Jack’s bike for a long ride up the Farmington Canal Greenway, a rails-to-trails route north from New Haven clear into Massachusetts.  Stopped for another coffee and a sweet roll at Dunkin Donuts, then back on the trail.  It was a warm morning, but the ride was great, 37 miles round trip.

On the trail, part of the East Coast Greenway, a series of trails that one day will link Maine and Florida; at right, the only existing lock from the canal

Took Kora for a walk around the block, then ambled a few blocks west to a great sorta-hippie eatery called Claire’s Corner Copia for lunch.  Back home, showered, took a nap (just like at home, especially tonic after a long ride).  Hopped back on the bike to get up to an even 40 miles, east a ways, then west to the Yale campus.  Needed to do a couple hours of work, and while aiming for the law library I stumbled upon the Beinecke Library, Yale’s repository of rare and old books.  Opened my laptop in a comfy chair right next to a Gutenberg Bible, which was pretty cool.

Zipped back to the apartment.  Jack got home from work, and we yakked and watched the Scottish Open with a true golf fan.  Reed has been a positive force in lots of ways, not least upgrading his home cooking, and he prepared a yummy meal of chicken, gnocchi, and salad.  Nice.  Clocked out early again.

Rinse, repeat.  Kora on leash by 6:05, retracing steps to Wooster Square, back home.  Hugged Reed as she left for work.  Back onto Jack’s orange bike, east to the Quinnipiac River, up the east bank a few miles, stopped at Dunkin for breakfast, back down the west bank.  Shaved, showered, and prettied up for an 11:00 meeting at the Yale School of Management, introducing myself to Professor Shin, doing a bit of selling.  Would be good to be invited, but we shall see.  Grabbed a nice lunch in the school’s café, then rode a mile to Jack’s work for a tour of Turnbridge, a growing treatment center.  Met a half-dozen of his co-workers (I was beaming inside when they told me how much they respected and liked him).  Back to the apartment, short nap, out the door, over to State Street Station.  My original plan was to fly right from New Haven’s tiny airport to Philly, then home, but the Transport Geek learned that CT Rail, the state’s commuter-rail operation, had reopened the line north 45 miles to Hartford, and I could get a nonstop home at 7:40.  Hopped on the 3:29 train, rolling north past marshes, low hills, hollowed-out industrial towns.

Above, wonderful 19th Century houses on the east bank of the Quinnipiac; below, a marina on the west bank. At bottom, the Mill River Swing Bridge, opening to allow passage of the tugboat Connecticut.

Arrived Hartford 4:20.  I had never really been downtown, and the bonus was a pleasant hourlong ramble from Union Station to the CT Transit express bus to the airport.  It was hot, but no matter.  As I left the station, the vista to the south was the 1878 State Capitol, a blend of architectural styles, but mainly looked French Renaissance.  It stood atop a hill in Bushnell Park, lovely, clean (Hartford was so much tidier and more orderly than New Haven).  Ambled on, pausing at the refurbished 1914 carousel, which was a simply wonderful conveyance; nostalgia welled as I watched happy kids, teenagers, and grown-ups go ’round and ’round.  Up a hill, past headquarters of The Travelers, one of the many big insurance companies in Hartford, and the art museum, then down the hill to the stop for the #30 bus to the airport.  It was conveniently right in front of a big Marriott hotel, so zipped in for the men’s room.  The place was teeming with attendees of ConnectiCon, according to Wikipedia “an annual multi-genre convention dedicated to a celebration of pop culture – everything from anime, to science fiction, comic books and card games.”  Mostly it looked like gamers; forgive a bit of judgment, but those people need to get away from their computers and get outdoors.  At the very least it would fix their pallor. 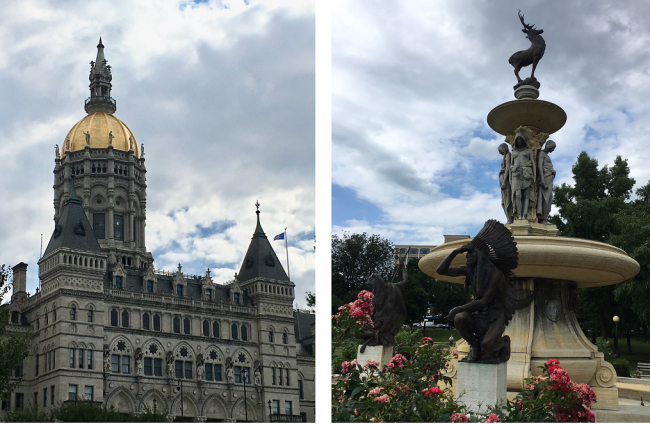 Above, the Connecticut State Capitol and a fine fountain in Bushnell Park; below, the Monument to Soldiers and Sailors, erected after the Civil War, and the Bushnell Carousel. At bottom, two pillars of Hartford: the Wadsworth Atheneum art museum and the 1919 Travelers Tower, headquarters of the insurance company with the red umbrella. 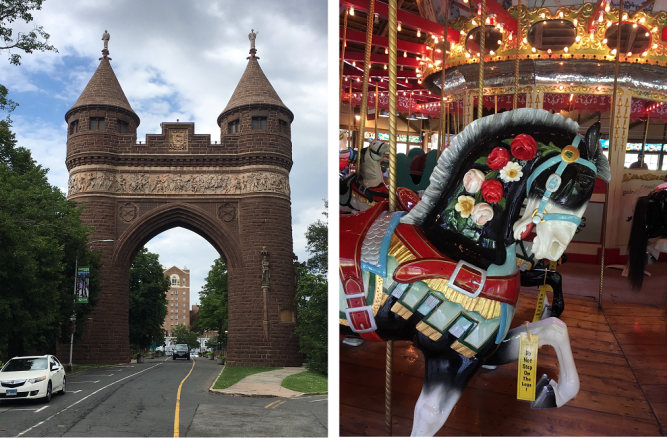 The express bus rolled up a bit late, but the A/C was blasting, and the ride for a senor was 85 cents.  Sweet.  And fast.  Was at the airport in no time.  Flight was late, but I was not in a hurry.  At an airport bar, brought this journal up to date in the ample time, and had a nice T-t-S with Jackie the bartender, about dogs.  She wanted to buy her young boys a dog, but the landlord required another $1000 damage deposit (on top of the existing one), and another $30 per month in rent.  As a single mom, she couldn’t afford that, so had to defer getting the Australian Shepherd puppy.  It was a poignant reminder of how unfair things are for working people.  Absent the ability to put a cream pie in the landlord’s face, I settled on a large tip, which she said she’d put in the special piggy bank they have for the puppy fund.  Hopped on American Eagle, and was back in D.C.