Broad Street at mid-day; the place had young energy, diversity, and an agreeable scale, contrasting markedly with the verticality of the rest of downtown

Was up at dawn on Friday, May 19, dogs on leash for quick walk, then out the door for National Airport and my first visit to Atlanta since 2000.   Delta Air Lines’ main hub, the largest connecting complex in the world, was even bigger, and I was reminded of a great aphorism that actually predates the rise of U.S. hub-and-spoke airline networks: Southerners say that when you die, you might go to heaven or you might go to hell, but either way, you’ll probably fly through Atlanta!

I had not taken a good look at the downtown in 30 years, so I hopped on their MARTA subway was in the city in under 20 minutes.  Hopped off at the MARTA “hub,” the Five Points station, and headed up to the street.  Jack Chapman, an Atlanta friend of our son Jack, had given me some recommendations on things to see.  He’s in commercial real estate, and presciently knew of my interest in the built environment (or else our Jack clued him in), so the tour was long on interesting older commercial buildings.

The Eiseman Brothers’ clothing store (1900) was razed to make way for the Five Points subway station, but they presered this wonderful facade — a nice welcome to downtown

The new football stadium for Atlanta

It was a quick trip, so I had a gym bag and backpack, but they were heavy enough to want to park them for a couple of hours.  Admiring the former head office of the old Citizens and Southern Bank (now part of Bank of America), I noticed two things: it was on the National Register of Historic Places, and it now housed the business school of Georgia State University.  I ambled in, took the elevator to the Marketing Department on the 13th floor, and introduced myself: “Good morning. My mother always told me there’s no harm in asking . . .”  In no time, Ms. Sharon walked me to the back room, and locked up my stuff.  Thanking her profusely, I promised to return by two.

Outside and lobby views of the former Citizens & Southern Bank

It was so nice to be back in The South, where strangers on the street look you in the eye and say “hello” or “good morning,” no matter their color or yours.  An hour later, when I was taking a photograph of the historic Candler Building, a USPS truck driver smiled at me and said “That’s the prettiest building in Atlanta.”  Although such a place is fertile ground for Talking to Strangers, I did not connect.  I did, however, have a great look around downtown and a splendid lunch of pho at Dua on Broad Street.  Grabbed my stuff and headed to my actual destination, Emory University.  The Five Points MARTA station was closed (police on scene), as was the next one north, Peachtree Center, so I walked on to Civic Center and hopped the train north, then the #6 bus east to the campus and my digs at the school’s conference center and hotel. 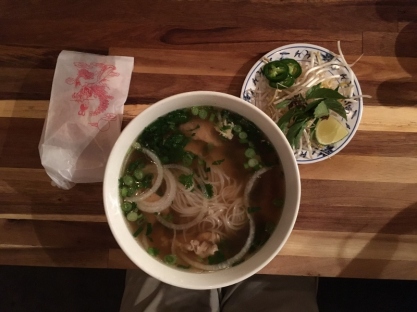 The Candler Building, once Atlanta’s tallest; Asa Candler was one of the founders of The Coca-Cola Company 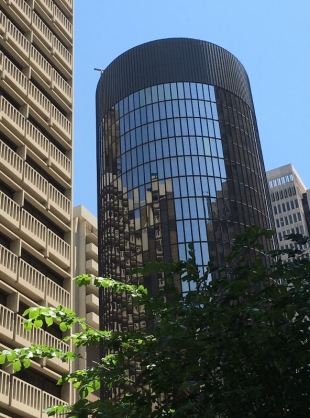 John Portman’s Hyatt Regency Hotel; back in the day, it was an architectual statement; today, not so much 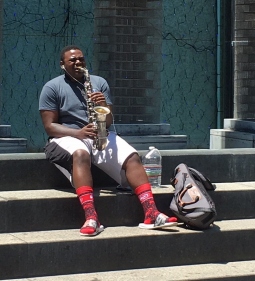 Belting it out in the midday sun

My roommate, longtime airline lawyer Gary Doernhoefer, was already in our room, working away, so I headed to the gym for some biking.  He was still on calls when I returned, but soon was free, and we yakked for about 90 minutes, catching up and prepping for a panel discussion the next day.  We were there at the request of our long host at Northwestern University, Anne Coughlan, who had organized a small conference on teaching distribution and sales strategy; our role was to discuss a cool multimedia case study of airline distribution, on which we three collaborated in 2015-16.

Kudzu, “the plant that ate the South,” near the hotel; it is an invasive and highly aggressive species

At 6:15, Gary and I headed down to meet the attendees.  Had some nice chats, got caught up with Anne, and enjoyed a fine buffet dinner.  A couple of hours later, about half of the group headed to Wisteria Lanes, a bowling alley right in the conference center (how cool was that?).  I hadn’t bowled in more than a decade, and my arthritic knees made for a bumpy roll of the ball, but it didn’t matter – we were all pretty bad and we all had a lot of fun.

Saturday morning we tucked into breakfast, then convened at nine.  Anne, Gary, and I presented for an hour, I listened a bit more, then ambled back to the bus stop, the MARTA train, and flights home via Charlotte.  A long run for a short slide, as the saying goes, but it was well worth it. 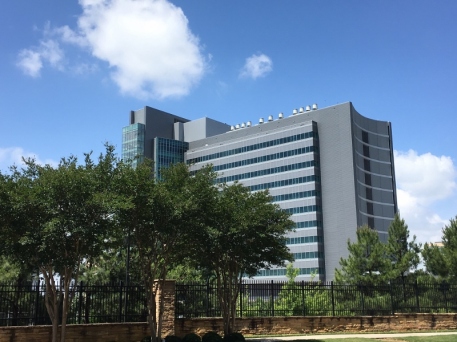