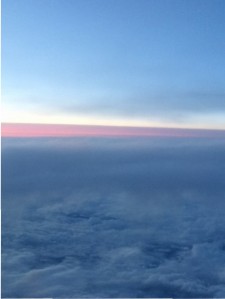 Enroute to Chicago, June 29. The sky is a good place to think.

There were two short trips later in June, one a sad day in Dallas to attend the funeral of the daughter of a former work colleague. Before and after a somber hour in church there were happy moments. On the way there, two wonderful T-t-S exchanges. The first was with an Iwo Jima survivor (his gimme cap identified him as such), sitting across the aisle from me on the flight. He was 92, and in really good shape. I shook his hand and thanked him for battling on my behalf, and as is almost always the case he was modest and self-effacing. But when the nation needed him, he was steadfast. The second was with the shuttle bus driver from the airport to American Airlines headquarters (where I met my ride to the funeral), a Mexican immigrant who told me proudly about her daughter, studying in New York to be a physician’s assistant. Her story did not square with the ugly racism spewed by Donald Trump a week later.

After the service I met many longtime colleagues, and it was great to see them, although under such grim circumstances. And on the way home I connected with the flight attendant serving us in first class, Paul Sullivan, working the cabin with his wife. Both were ex-TWA flight attendants (started flying in 1977 and 1969, respectively, but only married for 8 years). After dinner, he provided a summary of his career, and I was reminded that those who take wing for a living are a special lot.

On June 29, I flew to Chicago, rode across to Evanston with longtime friend Gary Doernhoefer, met the next day with Anne Coughlan, our host when we do a “tag-team” guest lecture at the Kellogg School of Management, and zipped home on the last day of the quarter. 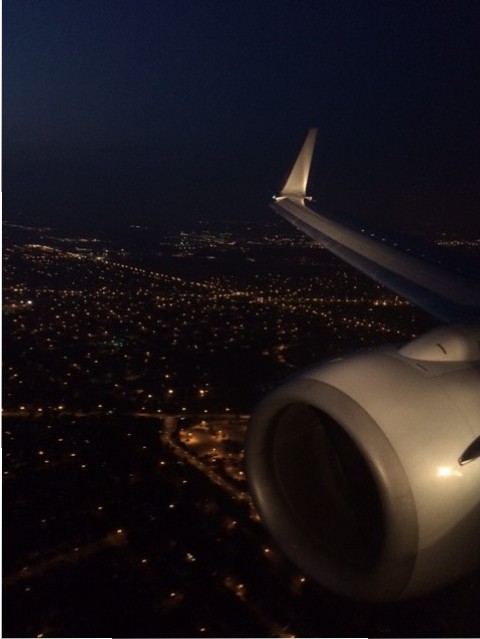 A recent post focused on the wing, and it remains both a powerful invention and a wonderful metaphor for many things.  Here a 737 wing above Chicago, snapped 30 minutes after the image at the top of this post.