New York on the Last Day of Spring

On Friday, June 19 I zipped up to New York for the day to see some friends. Flew into LaGuardia on a perfectly clear day, with superb views of Staten Island, Manhattan, Brooklyn, and Queens. Hopped the new Q70 express bus to Jackson Heights, then the E train into the city, to Penn Station.

On approach to LaGuardia Airport 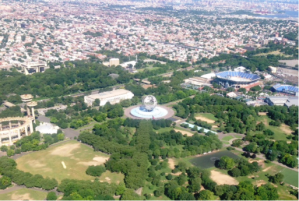 Just before landing, we flew over the site of the 1964 New York World’s Fair, with the Unisphere, a huge stainless-steel globe centerpiece

First stop was lunch with some airline friends I hadn’t seen in awhile, around the corner from Madison Square Garden. Dropped into a Starbucks for some work, then downtown for a quick look-see at redevelopment of the World Trade Center site. Since the September 11 attacks, I’ve only been there twice, once the following summer (2002), when it was basically a fenced-in big hole in the ground, still radiating a lot of emotion, and again in winter 2010, when construction was just underway. On the last day of spring 2014, a lot was completed – the 104-story Freedom Tower looked ready for occupancy, the new 9/11 memorial and museum was open (though I didn’t have time for a visit), and they were making progress on the way-over-budget transit hub designed by Santiago Calatrava (in the wake of an increasing number of reports of budget overruns, inattention to detail, and other woes, I am having serious reservations about his stardom). 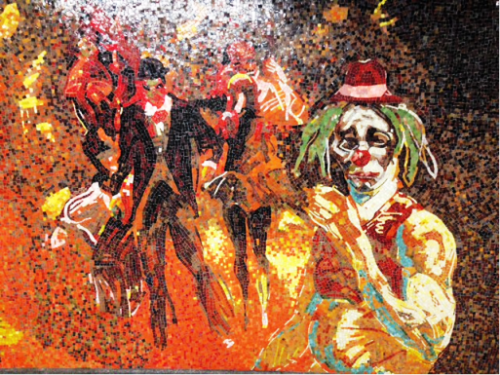 From Eric Fischl’s 2003 “Garden of Circus Delights,” a series of glass mosaics in the Penn Station subway concourse

Redevelopment at the World Trade Center

Then headed to the best stop of the day, under the East River to the neighborhood called Dumbo, short for “down under the Manhattan Bridge overpass.”  I walked down Jay Street to the river, past lots of hip youngsters. The view west to lower Manhattan was way cool. Every minute or so, trains would roar above, crossing the bridge. Redevelopment of a park was underway. Further north, the John Street Pasture, a field of red clover that, according to the sign, “is a temporary living earthwork that celebrates green space, agriculture, and the transitional nature of urban land.” Except for a lot of bees eagerly working the clover blossoms, it was empty. I could imagine a goats or sheep happily grazing the lush acreage. In the next block I came across a curious workshop, no front wall, just open air. As I was trying to figure out the place, Colin Touhey returned and explained that his company, Pvilion, designs, makes and installs flexible fabric solar structures. They use thin film solar cells laminated into fabrics and plastics, anything flexible. Whew. I could hear the low hum of brain power all along the street. I shook Colin’s hand, thanked him for taking time, and moved on. 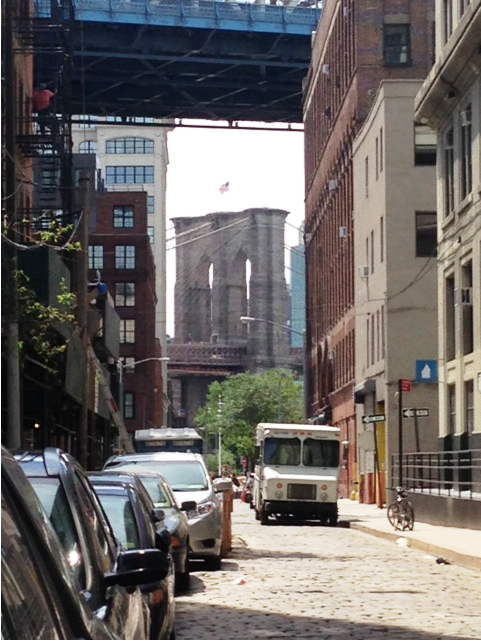 Street scene, Dumbo; a pier of Roebling’s Brooklyn Bridge is in the background 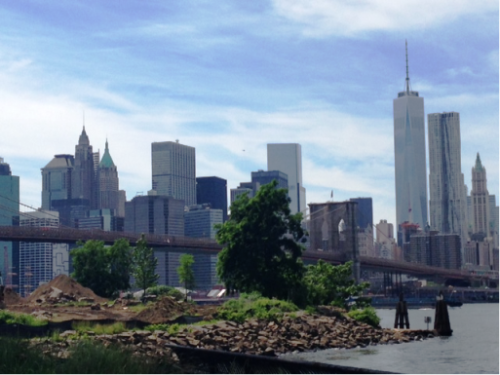 Red clover in the pasture

At the foot of Jay Street, I met Emily Sheppard, youngest child of my friend Jack Sheppard, who I met at Wharton in 1983 and who died a decade later, way too soon, at age 49. Though I see Jack’s wife Martha every few years – including just a month earlier, here in Washington – I had not seen Emily since she was a teenager, more than 20 years ago. She’s a partner in the Brooklyn Roasting Company, a specialty coffee company, with a good wholesale business and two very funky cafes. We had a look at their roasting operation, café, offices, enjoyed a sensational decaf Ethiopian cappuccino, and got a little caught up with two decades of an interesting young life. I was glad to reconnect. 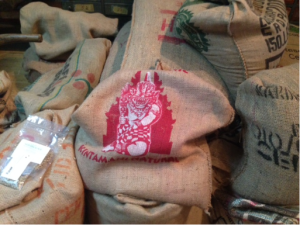 Emily and your scribe

Hopped back on the subway, F train through Manhattan to Jackson Heights, the fast bus to LGA, and US Airways home to D.C. A fine day off.