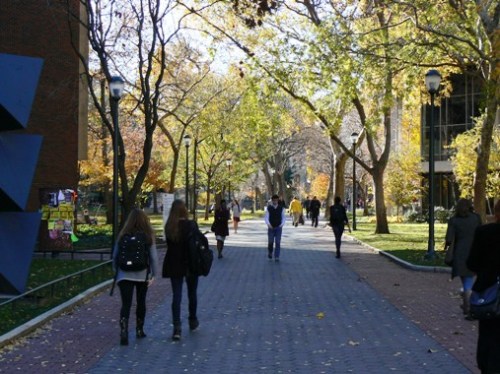 On the campus of the University of Pennsylvania, a place that changed my life

On Friday morning, November 8, Linda and I flew to Dallas, to attend the wedding of a long pal of Jack’s, Brad Ciesielski (Jack was best man).  I keep wanting to write “home to Dallas,” and as I have written before, going there as a visitor still seems odd.  In any event, we landed about noon, hopped in a tiny but zippy Mazda 2, and headed toward the Big D.  My friend Ken Gilbert responded to an email sent just before takeoff, and by pure luck he was having lunch that day with Nisha Pasha, another long friend from American Airlines.  So Linda dropped me at the Basmati Grill, a little Indian-Pakistani place in a strip mall in Irving, where I greeted my pals.  What a delight.  Karma!  We had a great visit (I was not hungry, but Nisha offered me some naan and a spoon or two of very spicy chickpeas.  We dropped her back at AA headquarters and Ken kindly delivered me to the very fancy Palomar Hotel, just across Central Expressway from Jack’s alma mater, SMU.  Changed into shorts and pounded out 25 miles on an exercise bike.  At six we drove a mile west to the rehearsal dinner.  It was fun to see old neighbors and friends, and some of Jack’s long pals (Brad and he go back to preschool, 1988).  Brad’s mom Julie is from Kansas, and we dined with some of her longest friends.

I was up early Saturday morning, down the street to Kroger for a parking-lot breakfast (two yogurts, a banana, and a donut), then Linda dropped me at a familiar place, the warehouse of the Dallas Ramp Project.  I had not built a wheelchair ramp for 13 months, but nothing had changed: the same cast of characters, great camaraderie, and the chance to make a difference in someone’s life.  I hopped in Hans Voorn’s car and we set off across town, to a trailer park in far southeast Dallas.  With the help of a bunch of volunteers from Suncreek United Methodist Church in Allen (a mile from our former home), we built a 36 foot ramp for James.  When we shook his hand at the end of the build we were reminded of the joy of direct action.  It was so nice to be back at work.  We were in Dallas for a big event, but that morning was a big event, too. 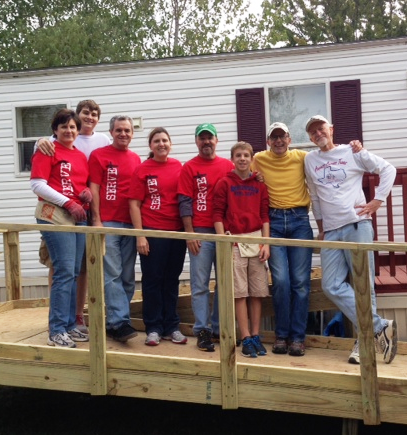 The ramp team with finished product 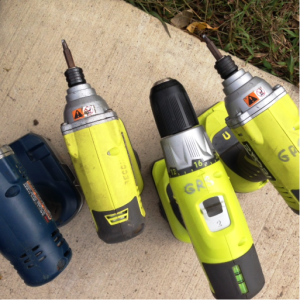 This one is entitled “Ramp Still Life”

Hans dropped me at the hotel about one.  Its luxury was a vivid contrast with the trailer park, always a humbling place.  Ambled across Mockingbird for some lunch, then back to the gym, a short nap, and over to church for the vows.  Conveniently, the reception was in our hotel, and we had a big time.  Sunday morning we were all up early, hugged Jack (our roommate for the weekend), drove to DFW, and flew home.   I miss Texas. 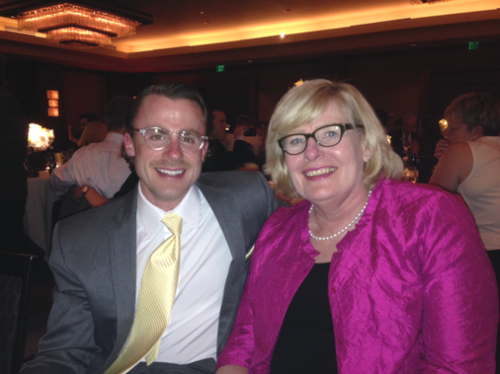 Two of my favorite wedding revelers

A week later, on Monday morning, November 18, I walked 400 feet to the bus stop, then the Metro, then Amtrak north to Philadelphia. Arrived at noon, clear and warm.  Ambled west on Market Street, through the Drexel campus, stopping for a seriously good lunch of noodles, tofu, and vegetables.  Walked south to the campus of the University of Pennsylvania.  Thirty years ago last summer, that place changed my life for the better, and a smiled as I walked up Locust Walk.  I was lucky to be admitted to the postdoc business program that I attended in 1983; there were 240 applicants for 40 places, and initially I was on a waiting list.  When I got word that I cleared the list, I was in a hotel room in Colorado, and still clearly remember levitating toward the ceiling, like a helium balloon.  Back on earth, on a fine autumn day 30 years on, I wondered: at an elite university like Penn, how many students viewed it as an life-changer, a remarkable opportunity for which they are – like I still am – hugely grateful, and how many saw it more like an entitlement, the natural progression from affluent family to private school or an elite public school, to ivy institution?  A useful musing a week before Thanksgiving. 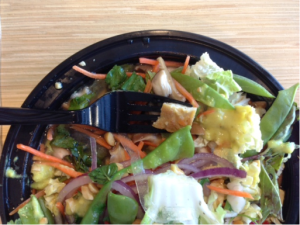 I stopped in the student computing center at the Wharton (business) School, and they got me “wired” to the wireless network, so I could do some work.  At three, I met Adam Grant, a professor of management and author of a very cool new book, Give and Take; the premise, which immediately intrigued me when I read a profile of him and his research six months ago, is that people who give freely of themselves do better personally and professionally.  Adam and I had corresponded a bit and it was great to meet him in person.  We bounced a few ideas around, and met a colleague with similar interests.  It was a wonderful reminder of why academies are such cool places – the world of ideas is an exciting place to be. 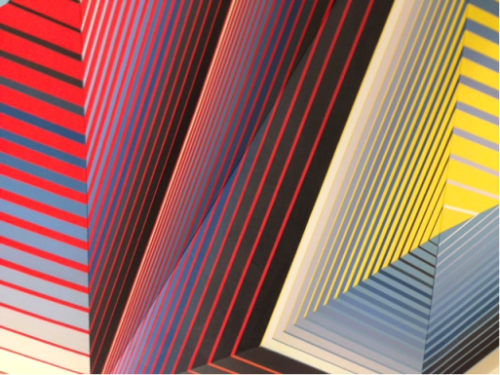 The Wharton School has a remarkable collection of art throughout its several buildings; here is a portion of Yoko Haru’s untitled 1983 work

Between 4:00 and 5:15, I met a Jaeyoun and Esther, a couple of Adam’s students who are interested in the airline business and who I agreed to introduce to contacts in the industry (one told me she had received an offer).  Worked my e-mail a bit, and at six knocked on the door of my long Wharton host Americus Reed.  Way cool to see him again!  First order of business was to meet a couple of undergraduates who were working on some marketing research; we helped them refine their plan for focus groups.  It’s always fun to be able to add value quickly.  An hour later we were in the car, rolling toward Society Hill (downtown, on the Delaware River), with Americus’ swell wife Veronica.  We started catching up on family and work and stuff in the year since I was last with them.  Whoosh, we rolled right past the Liberty Bell, shining in the night.  Let freedom ring!  We had a swell dinner at an Italian restaurant, then drove west to their house.

The Reed house is like a museum, full of all sorts of cool artifacts, like this machine

Tuesday morning, out the door with Prof. Reed, onto the bus a few stops to the UPenn campus, then into the Wharton School for three back-to-back lectures, with lunch after #2.  Was just great to be there, and to be with Americus.  Had time, barely, for one more quick meeting, with friend Pat Rose, who 30 years ago was one of the organizers of the postdoctoral program we attended.  We’ve kept in touch, and I try to see her, even if briefly, each time I visit.  It was a quick yak; at 3:55 she walked me to the trolley, which got me to 30th Street Station (just) in time for the 4:30 train home.

Home for six nights, and on Monday the 25th left the house as I did the week before, bus then Metro, but headed to the airport not the train station.  Flew to DFW for the second time in a fortnight, landing with the thermometer hovering just above freezing.   But the runways were dry, and in no time I was piloting a zippy Ford Fiesta northeast toward Richardson, Texas, where we lived for almost 20 years.  At 1:00 I met my pal Roger Tremblay, a longtime advertising-sales exec and total good guy, at Spring Creek Barbeque, a favorite for a couple of decades.  We tucked into a nice lunch and a great yak across a bunch of topics.  He peeled off, and I drove over to the Gilberts in North Dallas; Ken, a longtime AA colleague (often mentioned in these pages) and Peggy are just swell people.  We had a brief chat, and I got back in the car and headed south to Southern Methodist University and a twice-yearly talk on service quality that Prof. Dan Howard and I have been doing for almost two decades.  Check and done, as Robin used to say, and at 9:45 I headed back to the Gilberts.  I was worn out, but not too tired to pass up the offer of a seasonal India Pale Ale and some chatter, both with Ken and their two big dogs, Papi (who daughter Blair rescued a couple of years earlier from Tonga, where she was a Peace Corps volunteer), and Bella, a sweet and slightly timid German Shepherd rescued from South Dallas.  Nice to have hounds at foot.

Was up at 6:15 Tuesday morning for a yak and cup of coffee with Peggy (Ken was out for a two-mile run with the dogs).  We covered a lot of topics, including Thanksgiving plans (and the outline of a recipe for green beans).  I mentioned the cozy electric blanket on my bed, and that led to her telling me that she and her beloved slept in a full bed (“my electric blanket is Ken”).  I was surprised about the small bed, to which she replied, “Well, it’s the bed my great-grandfather was born in, in Egypt, Mississippi, in 1886, and that’s why I’m here . . .”  It’s exactly those kind of moments that make me so grateful for the hospitality of friends.  Just wonderful.

A little after eight, Ken and I motored separately to Cindy’s Deli on Forest Lane for a seriously caloric breakfast (any morning repast with biscuits and gravy puts one on a good start) and a long yak, mostly on airline and consulting topics – in retirement, we both do some work in the business.  At 9:30 I said goodbye, peeled off, and flew home.  Another trip to Texas, and several opportunities to tell myself how much I miss it.  We’re settling into Virginia, but the Lone Star State continues to pull at me.

Like the Reeds’ house the week before, the Gilbert residence is filled with cool stuff from their travels, including a lot of awesome folk art, like these birds from Mexico 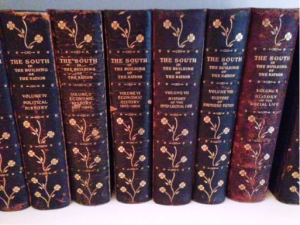 . . . And a lot of books, always the sign of a curious household