The postcard view of the Toronto skyline from the city airport. Close enough to downtown?

A couple of days later, on Wednesday, September 4, I hopped the Route 981 bus out to Dulles Airport and flew to Toronto.  But rather than landing at the big international airport, Pearson, we landed downtown, literally, at the Billy Bishop City Airport, on an island a mile from the center of town.  Porter Airlines has built a successful business flying into and out of the field.  I cleared immigration and customs, hopped on a ferry (the shortest ferry in Canada, 400 feet; they’re building a pedestrian tunnel, ready in 2014), then a shuttle bus to the Fairmont Royal York Hotel. 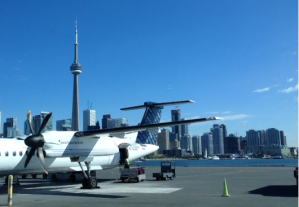 The short ferry; note the grain silos in the back, the former Canada Malting Co. — how long will they remain? Indeed, why are they still there? 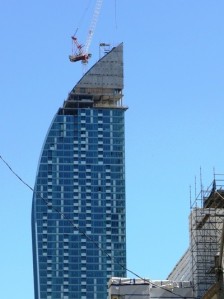 The Toronto real-estate boom continues; locals often predict an end, but I’ve seen nothing but boom for decades

I had a couple of hours before my meeting, so I availed myself of the free wi-fi in the very comfy lobby of the Royal York (a wonderful big old hotel, built 1929 for the Canadian Pacific Railway).   The sense of plenty is palpable in this city; I always see it as a splendid counterpoint to U.S. conservatives who decry “socialist Canada.”

Grabbed a quick lunch at Tim Horton’s, rode the shuttle and ferry back to the island, and at 2:00 began a meeting back at the airport with a client and a potential customer.    The meeting ended at 4:00.  I stopped into Porter Airlines’ head office, adjacent to the terminal, to say hello to a former colleague from American Airlines, Bob Cordes, who is now Porter’s COO.  Worked in the Porter lounge – every customer has access to a really pleasant place, with free snacks and drinks – for 90 minutes, then flew home to Washington.  The ride south was interesting, over western New York and Pennsylvania.  We think of those states as densely populated, but the western reaches of the Appalachian Mountains were thickly forested and empty; for more than a minute I looked down and saw zero evidence of human settlement – no roads, no houses, no towns, nothing cultural.

A terrible photo, from my iPhone, but you get the point: emptiness in the U.S. Northeast