To Dallas. But It’s Not Home Anymore.

The DART Orange Line — by next year it will run all the way to DFW Airport.

Slept in my own bed twice, then drove to Washington National Airport for the last trip of 2012, back to Dallas/Fort Worth for a sales call and a lecture at Southern Methodist University.  It seemed a little odd – was I going home?  No, but sort of.  Linda came along to visit friends, so she dropped me at a Holiday Inn near the airport and zoomed off in a rental car for dinner with a pal.  The hotel was a couple of blocks from the apartment where I lived 25 years earlier before the family moved down from Minnesota, lending a sense of déjà vu.  Was up early the next morning in the rental car, driving a few miles to meet colleague Bruce Wolff for breakfast; at nine, Linda dropped us at American Airlines’ headquarters (also a little surreal), and Bruce and I made a call on a longtime colleague.  All good.

Bruce peeled off for the airport, and at noon I met Adam Pitluk, new friend and editor of American Way, the inflight magazine, for lunch and a good yak.  Adam published an essay of mine a month earlier, and we talked about the prospect of more writing.  Getting back into freelance travel writing would be a nice little hobby.  Linda had the car, and getting from DFW to SMU became a saga.  After hopping a shuttle bus to Terminal A, finding change for a $20 (a taxi driver was happy to sell me $19 for an Andrew Jackson), and waiting for awhile, I learned that the bus stop for the new DART Route 500 was temporarily relocated.  Trotted to the upper roadway of the terminal, and boarded the 500 bus. Oops (and despite assurances from a DART employee at the temporary stop), she was headed southbound, not to the Orange Line, so I rode to the end, we turned around, and headed to the right place.

About 80 minutes after the T-Geek found this great new way into Dallas, I finally arrived at the Belt Line Orange Line station. But I was still more than 20 miles from my destination, Southern Methodist University. But it was a straight shot, the train was empty, did some work on my laptop, and was on campus by 4:15.  From 6 to 9:30 Dan Howard, longtime marketing prof, and I delivered a talk on service quality.  Linda picked me up at 9:45 and dropped me at AA pal Ken Gilbert’s house.  Staying overnight with friends in North Dallas, also a little unreal, but some good conversation and a beer made for a nice end to a busy day.

Up early Tuesday morning for a yak with Ken’s wife Peggy before she left for work, and a morning-long chat with Ken, plus a long walk with their two dogs and a caloric breakfast at Kel’s, a well-known greasy spoon.  Linda picked me up at noon, we drove back to DFW, and flew home. 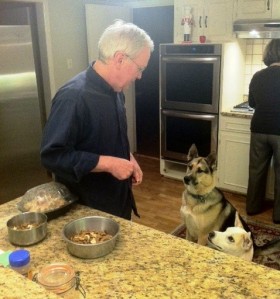 Ken preparing breakfast for Bella (L) and Papi, who “emigrated” with the Gilberts’ daughter Blair when she returned from a Peace Corps stint in Tonga