On Monday the 21st I flew up to New York.  Despite its importance, it’s a place I seldom visit, usually just once a year.  It was a detour – actual destination was Washington, DC, for Thanksgiving with Robin and our cutie-pie granddaughters.  The original plan, followed since 2005, was to head up to The Big Apple the day before and present a seminar at Business Today conference organized by Princeton students, but this time they canceled my gig, citing budget woes (I’ve always worked that one for free, so it wasn’t me that was costing!).  I had set up a (overdue) chat in New York with a longtime friend, Pete Pappas, so I kept that one. 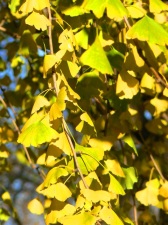 As always, hopped in a cab for a short, cheap ride from LaGuardia to Jackson Heights, then the express subway into Manhattan – way cheaper and almost always faster than a taxi all the way.  It was a nice day and I had an hour, so I grabbed a sandwich, chips, and a bottled mango smoothie at a deli, and found a park bench on Central Park South, facing that marvelous green space.  Over my left shoulder was the huge bronze of José San Martín, riding horseback, bound to liberate Argentina, Peru, and Chile; he had my back.  In front of me was a swell mix of tourists and locals: visitors riding the horse-drawn carriages, skateboarding youth, kids climbing one of those enormous igneous boulders that bulge everywhere in the park (and add a splendid wildness), and the last bright hues of fall foliage.  It was a nice place, in a place I generally don’t like.

The view from my picnic spot on Central Park South

A little after one I walked into Pete and Ivy Pappas’ apartment, right on Central Park South.  Gave them hugs and remarked that in 40+ years of travel to New York, I had only been in three or four Manhattan apartments – dwellings widely reckoned to be at the apex of urban life.  It was a pretty cool pad.  We had a great yak, and just after three I left the building, walked less than 40 feet to a the Columbus Circle subway station, rode four stops south to Penn Station, then the Long Island Rail Road to Jamaica, Queens, then the AirTrain to Kennedy Airport ($13.75 and 40 minutes, vs. $50 in a taxi and traffic jams).

American Eagle flies JFK to Washington National.  I fully expected the huge delays that are so typical of that route, but we boarded on time, pushed back from the gate, and were airborne within ten minutes – I have flown out of JFK more than 30 times in four decades, and had never escaped so quickly.  Landed at National, hopped on the Metro, and was at friend Carl Nelson’s house in Capitol Hill just after seven (he and wife Mary had gone to the Capitals hockey game, so I used the secret way in).

Mary and I had a good yak the next morning, and I headed out.  My corner office for the morning was to be the main reading room of the Library of Congress, a mile west.  I had not been there since 1976, when I was doing dissertation research and was looking forward to it.  (There was some nice symmetry between then and now: in both cases, research and writing about the travel and tourism industry.)

A few things had changed since then, notably security and ease of access – I needed to get a library card, but that was fast, and I opened my laptop about 9:15 in that fabulous hall.  It had been beautifully renovated sometime between ’76 and ’11, and was much fancier than I remembered it.  Above me was the giant rotunda of the main library, now called the Jefferson Building, stunning painted plaster detail, cherubs, gods and goddesses of varied knowledge.  Around me in radiating circles were oak desks.  Above me were seraphim holding a tablet that read “The inquiry, knowledge, and belief of truth is the sovereign good of human nature.”  Whew!  Nice inspiration!

I had to leave my backpack in a cloakroom, and honestly did not see the signs strictly prohibiting photos, so I snapped a couple.  Way cool.  Mostly, though, I put my head down and worked hard for a few hours.  They had free wireless, but like many libraries it was impossible (for me, at least) to send e-mails, so after a huge lunchtime burrito I repaired to a more familiar “corner office,” the Starbucks at 3rd Street and Pennsylvania Avenue SE.  Sat in the front window and worked, out of the cold rain.  Atop a bank across the street, I spotted a some words that made me nod and wish for older values; carved into the stone on the cornice molding were the words “Dedicated to Thrift.”  Indeed, for in addition to refocusing on the common good, we need to save more.  And, yes, we can do both.

When I headed to lunch on Tuesday, the capitol seemed to be in lockdown, including police on bikes!

I got a lot more done in a couple hours, and about 3:30 I walked back to Carl’s and Mary’s.  Worked and yakked with Mary, telling stories, laughing.  Carl arrived home after seven, we had a nice dinner of spaghetti and (IKEA) meatballs, I cleaned up the kitchen, and clocked out.

Next day, same drill, into the reading room a bit earlier, banging away on the keys.  Head down, got a lot done.  At noon I met daughter Robin for lunch at Georgia Brown’s, one of my favorite restaurants, specializing in cooking from the “Low Country” of coastal Carolina and Georgia.  Yum!  We motored out to Reston, I checked into the Hyatt at Reston Town Center, and we zipped out to Leesburg, 20 miles west, where Robin had a meeting.  I peeled off to King Street Coffee for a cup and a wi-fi connection, and went back to work.  Leesburg is the seat of Loudoun County, once rural and now suburbanizing rapidly, but the downtown is a nice mix of buildings going back to the early 19th Century.  Admired the old courthouse and some solid commercial buildings on King Street. 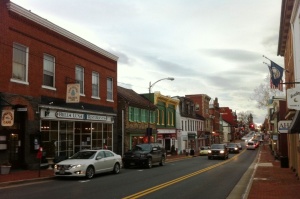 At 4:30 we drove back to Reston.  Granddaughters Dylan and Carson arrived with their dad a few minutes later.  It was so good to see them, and a new arrival, Henry the West Highland Terrier, an energetic (aren’t all terriers?) puppy.  We bonded instantly, and I gave him middle name, Angus, a true Scot.  Linda arrived a couple hours later, the kids went to sleep, and we peeled off to the hotel.

Thanksgiving morning dawned fair and cool.  We motored back to the house, and played with the kids.  At 1:30 we drove to the East Falls Church Metro station.  Dylan likes to ride the train, and so does her gramps (Pots, that’s me), so this was a great way to get to dinner at Founding Farmers, a great restaurant in downtown Washington that specializes in locally-sourced comfort food.  We had a great meal (and no clean-up!).  Outside the restaurant were some cool fountains that kept the kids and me busy for quite a while – we got wet, but not that wet.  It was a lovely day. 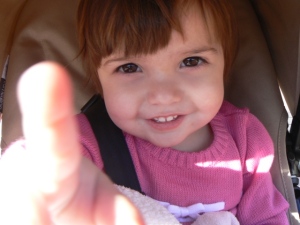 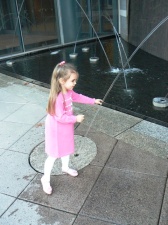 Friday was busy and fun.  We saw the first 20 minutes of a holiday parade in Reston Town Center, then headed into the movies to see The Muppets.  Loved it, seeing Kermit, Miss Piggy, Gonzo, Janis (“fer sure”), and the others.  And the kids liked it, too.  Carson does not understand the need for silence in the cinema, which added to the fun; when Camilla and her brood started singing a number, Carson replied “Cock-a-doodle-doo”!  Too cute.  After the show, we headed back to the hotel room (conveniently just a block away) for some bed-jumping, then out for a bit of shopping and an early dinner.  Lots of fun. 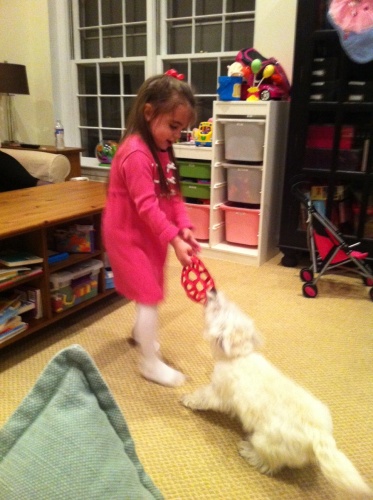 Saturday morning was still warm and sunny, and Pots put the kids in the Radio Flyer wagon and Henry Angus on leash, and off on a wooded trail to a small playground.  The tots loved it, Henry loved it, and I was plumb wore out by the end – swinging swings, climbing the slide latter, making sure neither girl fell, chasing Henry when he pulled the leash away.  Whew!  But on the eve of my 60th birthday, it made me feel alive.  We were sad to say goodbye when we flew home that afternoon.  “When are you coming again, Potsy?” asked Dylan.  Those girls are such a blessing. 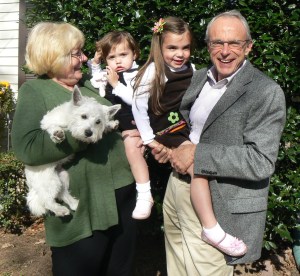