I was home from Germany just long enough to help build a wheelchair ramp for Juan, a young man in West Dallas, take Linda out to dinner, stretch my legs on the bike, catch up on some e-mail, and pay a few bills. 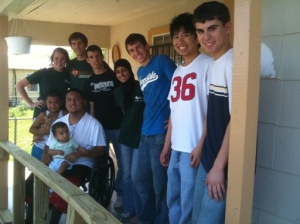 Monday afternoon I flew to Chicago for a meeting the next day. The green way from the airport to Cousin Jim’s house is a bus then the Metra suburban train from Des Plaines, a few stops from Jim’s home in Arlington Heights. Waiting on the train platform at Des Plaines, I noticed a fellow wearing a maroon University of Minnesota windbreaker. Passing him, I pointed to the “M” logo and said “I went there, too.” Thus began a wonderful Talking to Strangers engagement. I wished I had gotten his name, a fellow who graduated a year before me, played varsity football, and became a lawyer. In 15 minutes we covered a lot of topics, but the most interesting yak was about those turbulent times in the late 1960s and early 1970s.

Jim and I drove off to watch son Charlie and daughter Katie practice soccer, then back home for dinner at out to Eddie’s bar for a couple of beers with neighbor Rolf and cousins Mike and Bob. It was a lot of fun. 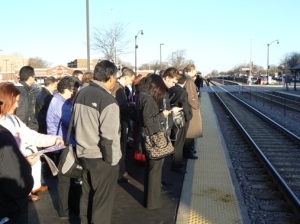 Waiting for the train, Arlington Heights

Was up early the next morning and onto the train for downtown Chicago and a meeting with Don Kolodz, a senior sales guy at SATMAP, a company with a very advanced software solution for call centers (I began helping SATMAP in 2010, and it’s now my “moonlighting” job). We had a good sales call with a large prospect. At noon I met longtime airline friend Brent McNamara for lunch and a good yak at the Berghoff, a traditional German restaurant that has been serving on Adams Street since the 1890s. I was determined to get back in the groove of weaving a little “place discovery” (or in this case rediscovery, because I have been a Chicago visitor dozens of times over more than five decades), and snapped a couple of pictures before flying home: 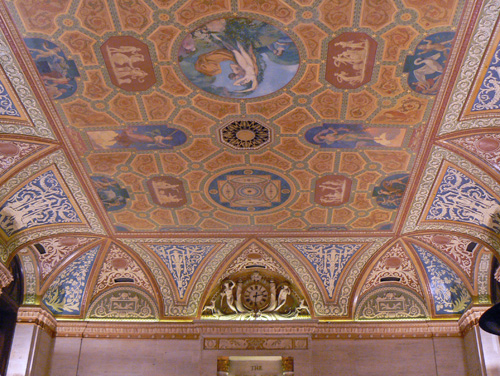 The ornate lobby of the Palmer House Hotel, which opened in 1925 and was designed by Holabird and Root, at the time one of Chicago's most prominent architectural firms 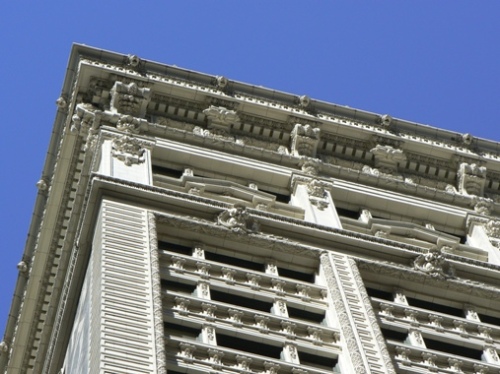 The Majestic Building (1906), a splendid example of the Beaux-Arts commercial style; when it opened it was the tallest skyscraper in Chicago