Minneapolis and Chicago, for Classes and for Old Friends

The atrium of the new Science Teaching Building, University of Minnesota

North to winter again, on February 14. Landed in Minneapolis/St. Paul before three, into a Hertz car, and down to my alma mater, the University of Minnesota. Met my host Debbie John for a quick yak, then an advertising presentation to night-school MBA students at the Carlson School of Management. After Q&A and brief visits with a couple of students, I peeled off to dinner with Deb and Phil Ford, longtime friends, but infrequently seen. Dr. Deb is a therapist, and she, Phil, and our Jack had brunch the day before, so a lot of conversation focused on our son and his prospective counseling career. We covered ground, and with Deb and Phil there’s always a lot to talk about, but I was teaching early the next morning, so I left about 10:30, motoring to my digs at Chuck Wiser’s house. Plumb wore out.

Up at six, out the door, back to the U of M, stand and deliver to Dave Hopkins’ brand-enterprise students from 8:00 to 9:30, then up to the really comfy and sunny office of Debbie’s husband, George, chair of Carlson’s Marketing and Logistics Department. At 12:45, Debbie, George, and I zipped a mile south to Birchwood Café, a wonderful slightly-hippie eatery (I was the only one in the joint with a necktie). They’re an interesting couple.

The view from my temporary office, West Bank, University of Minnesota

Returned to George’s office, worked a couple hours, and at 4:15 met a relatively new friend Genie Smith, at the bar of the Campus Club, a mostly-faculty facility atop the U’s student union. Genie and I share a deep love of our alma mater, a place that changed our lives for the much-better. She has been there, as undergrad, grad student, and staff member since 1963. We talked about “the U,” the bleak state of state and national politics, jobs, and more. We parted about six, I ambled back to the car, and drove across town to the Black Forest Inn. There was a date mix-up with my intended dinner pals Bob and Paula, so I was solo, but not lonely. Worked some e-mail, yammered with the waitresses (a few months’ hence would be the 40th anniversary of our first visit there, and that built cred with the servers!). 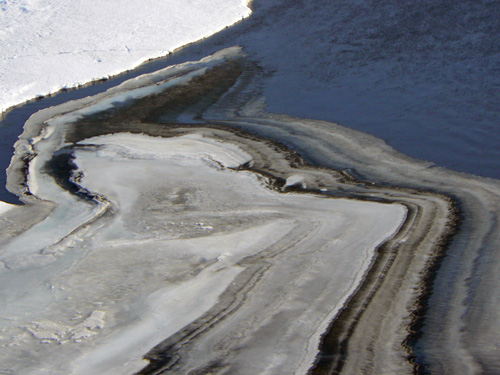 Next morning at 7:25 I met Jack Britton for breakfast. We motored back to the Birchwood, and tucked into a great meal and even better conversation. He’s in the last semester of his Master’s program in substance-abuse counseling, and his semester’s clinical work is as a counselor at StepUp, an innovative program at Augsburg College, a small Lutheran college literally in the shadow of the University of Minnesota. StepUp is an on-campus residential community for students in recovery. A great mission, to be sure, and Jack loves the work. After breakfast we drove to Augsburg and introduced me to several of his StepUp colleagues. I felt so proud.

I was headed to Chicago to teach at Northwestern the next day, so it made no sense to fly home, then north again. After visiting Jack, I peeled off to do some work. My office could be anywhere, but I had a specific place in mind: a far-back corner of the John Borchert Map Library, in the sub-basement of Wilson Library. It was where, 33 years earlier, I wrote (in longhand) my Ph.D. dissertation. It was then and remains and ideal spot, quiet, with splendid white noise from a nearby mechanical room. I opened my netbook, connected to the U of M’s wireless network for guests, and got productive. Like other places I visited in the previous two days, it was so great to be back at “the U.”

At noon, I met one of my Ph.D. advisers, Professor John Fraser Hart, who has been teaching geography continuously since 1949. Whoa! 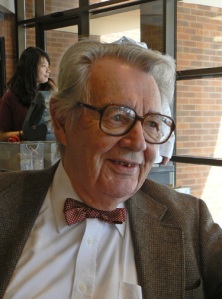 Though his gait showed some signs of age, his mind did not. We had a great, quick lunch (he kept his eye on his watch, sure to be back for a class or an appointment at one) and yak. I learned how to write clearly from Professor Hart, and that has been an enormous and ongoing gift. He’s still a curmudgeon, but he’s my favorite curmudgeon.

I returned to my seat in the Borchert Map Library and got a bunch of stuff down in a few hours. Before leaving campus, I dropped in on another old pal, John Easton, and had a quick chat. I first met John in 1972; he was one of those people who could see the promise of technology, especially computers, and he’s spent his entire working life next to them.

Next stop, next friend: I dropped in on Steve Schlachter’s mother, Marlys Chase, still living in the same Edina house where Steve grew up. She wasn’t expecting me, but we were both delighted to catch up. Her living-room mantle was filled with birthday cards; her 81st was a few weeks earlier. We’d all like to be as vital and active in our ninth decade as she is. She told me about outings to the theater and orchestra, the book club, meals with chums from the Washburn High School Class of 1947. And she had a firm grip on world affairs, as well as (shared) strong views on Palestinian statehood and other Mideast topics. It was an inspiring 40 minutes.

Last pal: dinner with Anne Hathaway, friend since my first day at Republic Airlines in 1984 (I’ve mentioned her father Howard in many of these updates; as Don Miguel, he delivered televised Spanish lessons in the early 1960s). We had a couple of beers and sandwiches at a noisy bar in Bloomington.

When I turned on my mobile Thursday morning, I learned that my 8:40 American Eagle flight to Chicago had been canceled. Luckily, four airlines fly the route, and after a bit of quick research I bought a (standby) airline-employee ticket on Southwest, trundled across the airport to Terminal 2, and snagged one of the last seats on their 9:00 flight to Chicago Midway (treating the gate agents and a few customers to my “Flying Standby for 45 Years Victory Dance”! I had flown Southwest only twice before, years back, but their trademark efficiency, friendliness, and customer engagement was something to admire.

Mural, Chicago Midway Airport; the terminal, parking structures, and other buildings are filled with colorful art, much done by local public-school students

Hopped on the Orange Line “L” (rapid-transit train) at Midway, into downtown, then the Blue Line out a few stops to Division Street, where I met Cousin Jim for lunch and a quick catch-up. We would have yakked more, but I needed to get back to the Loop and the afternoon mission: to get more pages added to my passport. I’ll spare you the details of bureaucracy, dear reader; all’s well that ends well, as Shakespeare wrote, and a couple of hours later I left with a much thicker passport.

Back on the L, north a few stops, then toward Michigan Avenue and the downtown campus of Northwestern, where I met my longtime host, Anne Coughlan. It was my 12th visit to her MBA course on sales channels and distribution, another night class. We had a nice dinner and a good yak, then time to work. Zip, zip, lecture done, lots of good questions. High point was a chat after class with Christoff Poppe, an MBA student and executive at United Airlines. Another airline survivor! Walked to my hotel, read a bit, and clocked out.

Friday morning I hopped across State Street to buy breakfast at an urban supermarket, $2.28 for two yogurts, a banana, and a jelly donut (which every Midwesterner knows is a bismarck), then onto the L, up to Diversey Parkway and west on the #76 bus to Marshfield Avenue, my mother’s childhood neighborhood. Since visiting seven months earlier, my Uncle Alan, Cousin Jim, and Cousin Tom pooled dollars and bought a yellow and green banner marking the centenary of St. Bonaventure Catholic Church. Took a couple of pictures, hopped back on the bus and L, out to O’Hare and home. 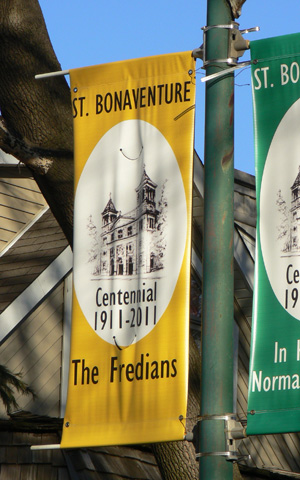 Our banner on Marshfield Avenue