The North Shore of Lake Superior

The Pines, a famous stand of evergreens close to the Gunflint Trail, Cook County, Minnesota

On Friday the 24th, Linda and I flew north to Minnesota for a quick weekend with Jack, up on the North Shore of Lake Superior. Enroute to his house, we stopped at the Minnesota State Fair to pick up the watercolor that I bought five weeks earlier.

This year's State Fair choice, At the Lake, shown hanging in our house

The Fair changed the buying process; in the past, you picked up the art from the artist, which offered a wonderful opportunity to meet and visit with him and her, and learn a little about the creative process (something that, as I have often noted, fascinates me). I wrote the artist, but she didn’t reply, so parked and entered an administrative office, where the receptionist told me there would be a $10 “holding fee,” because I had not picked it up within the time frame specified in “the rules.” I told her I didn’t recall receiving a copy of those. She shrugged, so I paid the ten buck shakedown, and we continued north.

Picked up Jack a little after eleven and got back on I-35 toward Duluth. It was raining lightly, but the forecast was for clearing. Still, the cool felt great, and the fall color was sensational. I smiled broadly when we crested the hill above Duluth and the big lake, the one the Anishinabe (Ojibwe) people called Gitchi-Gumi, the Superior I have marveled at for 53 years now. Beyond the town of Two Harbors, we stopped for a late lunch at Betty’s Pies, a sensational place. I had a walleye (fish) sandwich and split Jack’s five layer chocolate mint pie. Whew!

Linda took the wheel for the last 80 miles on Highway 61, which winds along the shore. I was glad to be a passenger, and my neck swiveled a lot, taking in the raw beauty of rocks, the mixed evergreen and deciduous forest, and many streams tumbling down an escarpment to Lake Superior. Later that day, I tallied the trips along the shore since 1957, and every one of the 31 has been a delight.

The autumn portion of a four-section mural created by fourth-grade students at the local elementary school; it adorns the west wall of the local food co-op 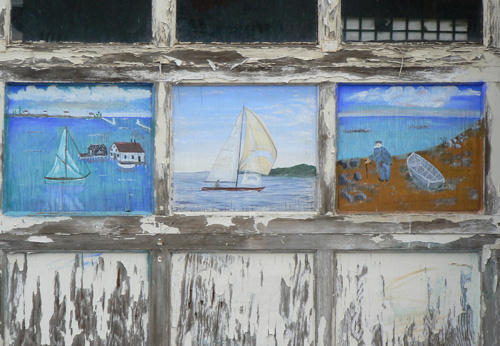 Grand Marais has always attracted artists, even for a weathered garage door!

Renovators of the old East Bay Hotel saved the iconic sign, which I recall from my first visit in 1957 (we had dinner in the hotel dining room)

We checked into a Best Western and took needed naps. At seven, as we did back in the 1990s when we came up year after year, we ambled to Sven and Ole’s Pizza. Unlikely that Swedes would make a good pie, but they do, and the place has become something of an institution. After dinner, I peeled off and walked along the lakeshore. Returning to a familiar place offers a chance to take stock, and I thought a lot about the past, including how much my dad loved the North Shore.

On Saturday morning, Jack and I jumped in the Ford and drove up the Gunflint Trail (actually Cook County Highway 12), rising 800 feet above the lake, then entering thick woods. I wanted to show him some famous old pines that hug the road. He’s a great photographer, and snapped away. On the way back, we detoured down a dirt road to Elbow Lake. The sky was clearing, and the autumn color around the lake, and on hills in the distance, was splendid.

After breakfast, the three of us motored north to C. R. Magney State Park, named for a judge and conservationist who worked to build parks and preserve the wild character of the North Shore. On a plaque inside the park was a great quote from Judge Magney: “our state parks are Everyman’s country estate.” Amen to that. We crossed the Brule River on a footbridge and headed upstream to some waterfalls and a curious formation called Devil’s Kettle, where the river has, over the eons, bored a hole and disappears into igneous rock. Way cool. The leaf colors were splendid. On the way back, we saw a Bald Eagle across the river. Wow!

After lunch, Jack and Linda went shopping, and I drove a few miles east to do another hike, along the Superior Hiking Trail (which runs the length of the North Shore, from Duluth to the Canadian border). I parked and was soon ambling west and north along the Devil Track River, amid spectacular foliage, and zipping up and down over ridges. My creaky knees held up, and I made it to a bridge across the river, 2.3 miles from the trailhead, in 44 minutes. Reversed course, snapping pictures along the way. Walking in the woods is such a delight. We walked to dinner at Chez Jude, a remarkably fine place to eat, headed back to the motel, and put on pajamas. A long, wonderful day.

Here are some snaps from that day: 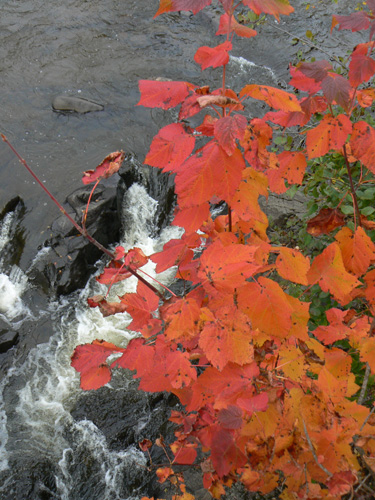 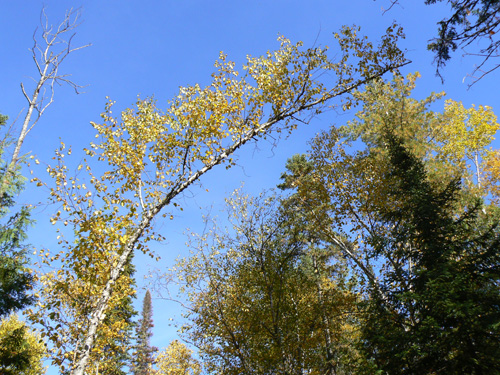 I got up before sunrise Sunday morning, for prayers of thanks and intercession on the beach, then a walk out to the lighthouse at the end of the harbor breakwater, then west to Artist’s Point, subject of many a work of art (including a watercolor above our fireplace). The morning light was superb. Ambled back to the room, ate breakfast, and drove back, dropping Jack in Chisago County, and popping in for a short visit with Linda’s mother, Karen, in her late 80s and still going strong.

Here are photos from sunrise on Sunday: 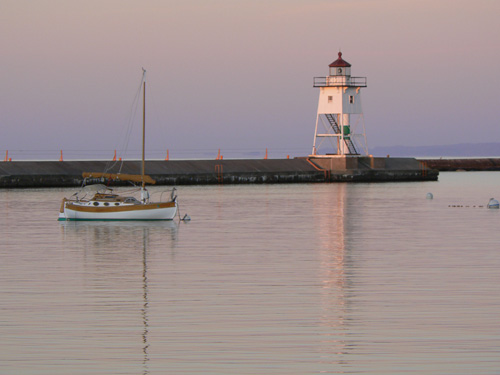