The View from Above: A Friend’s Perspective

Jeff, a former colleague in International Planning who is now CFO of a major company, wrote me recently with the following. It was so right on that I decided to post it, with just one image to pay off his points:

I am flying back from Europe to SFO. We are taking what the captain described as the most northern route he has ever flown. So we are soaring over some of the most spectacular scenery on the planet. Of course, I can’t see any of it, because the airlines have all gone to insisting all passengers fly with the shades down so that the passengers all turn into video zombies. To me, this is a tragedy of unintended consequences as the airlines have installed ever more sophisticated inflight entertainment systems. I fly every week, yet the magic of flight and the views of the planet earth are always inspiring to me. I get to see them less and less, however. Today we all just sat in the dark with most people watching TV and while my tired old eyes tried to read with my malfunctioning reading lights.

Now I am generally a very mild mannered guy who does not like to make waves. But since I am now a full fare paying first class passenger when I fly, this is one issue where I can get cranky at times. But after having an AA flight attendant a while back literally shove me out of the way when I was slow to close my window, and after having a fellow first class passenger today (on UA, who actually said “there’s nothing to look at out there anyway!”) almost get into a fight with me while a flight attendant tried to mediate, I guess I will surrender henceforth and forget one of the majesties of flying that I formally never got tired of. To be overdramatic, this is just one more sign of the decline of civilization into mindless media and video gaming . . . and of the loss of one of the special things about commercial aviation. 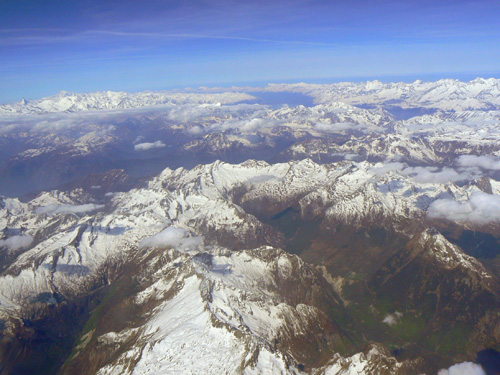 The Alps, on a flight from Zurich to Milan