Five days later, on Thursday night (the 6th), I flew to Buenos Aires. Georgina and Alejandro, two students from ITBA, the Buenos Aires Institute of Technology, picked me up at the airport and drove me into the big city. The original plan was for me to participate, for a fourth time, in their student-run South American Business Forum. Unfortunately, the outbreak of the H1N1 virus in Argentina, and government inaction when it first infected, led the students to postpone the forum until October (when I could not participate). Since I was already committed to teaching across the Andes in Santiago, Chile, on Monday the 10th, I offered to present a workshop to the ITBA students – crisis management seemed to be a good topic – and they accepted. As I have written, I have become a sort of minor patron and enthusiastic supporter of the forum, which requires enormous student work and commitment. The least I could would be to do a bit of teaching on how to deal with the inevitable crises that make their way into business and into life.

The students dropped me at my hotel, a small boutique place I found on the Internet; it was one of those too-hip-for-me places – where else would you find an enormous portrait of Eva Peron made from dried bread, or a big one of local boy Che Guevara with sequins and spangles?

At eleven that morning I met my old boss Bob Crandall (American’s former Chairman and CEO) and his wife Jan in the lobby of the Sheraton Buenos Aires, for an early lunch. But the fancy dining room in the Park Tower of the hotel was not yet open, so we repaired to their suite on the 18th floor. Jan told me that in all her years of staying at fancy hotels, she had not seen a suite so enormous and well-appointed. Indeed, it was eye-popping. Ever one for order, Bob looked at my face and suggested I try out the complimentary shave cream and razor (I had not been able to check into my room on arrival an hour earlier). “Okay, Dad,” I replied, laughing. We had a pre-noon glass of wine and headed down to a lobby bar for a sandwich and some good conversation, ranging widely, and well away from the mess that is the airline business. It was a lot of fun. I had not seen Bob for a few years, and Jan for more than a decade. They were in Buenos Aires to have a look at their catamaran under construction, which they will sail north later this year.

Ambled back to the hotel for a short nap, worked my e-mail, then out for a walk through the center, down Calle Florida, a shopping street, cup of latte at McDonald’s, then south past the presidential palace, the Casa Rosada. There I noticed clumps of riot police, but no protesters.

Several blocks north, as I approached the main street called Corrientes, I heard drumming. When I turned the corner, there was the protest, trade-union groups and lefties of all manner, banners with the ubiquitous likeness of local guy Che Guevara. The parade began, and I watched for about ten minutes. Quite a scene!

Back at the hotel came an e-mail message from Juan Trouilh, the young guy who first invited me down to the South American Business Forum several years earlier. He wondered if I had time for a chat. Why not? We met in the hotel lobby, visited briefly, and I outlined my plan to visit two of the city’s bares notables (no translation needed), the second one for dinner. “Wanna come along?” I asked. Yes, he’d join me, and off we went, to the subway and out to the first place, Miramar, in the San Cristobal neighborhood just west of the center. More a restaurant than a bar, it was closed, but a friendly young manager opened a large sash window and Juan explained that the visitor read about the place in The New York Times. Remarkably, the fellow invited us in for a look around. It was very old school. We chatted in Spanish and English, thanked him, and hopped in a taxi to bar notable #2, El Preferido de Palermo, in Palermo, a hip and comfy neighborhood.

It was rush hour and it took awhile to get there, but it was worth it. The place was just way local and way cool. Arriving at 6:30, there were only a few folks inside (locals eat in the manner of the Spanish, which is to say late). We ordered a large bottle of Quilmes bock beer and an appetizer plate of meats and cheese, and kept yakking. Juan is a swell young guy, trying to get an Internet business off the ground. We covered a lot of topics. He was heading to a dinner party at ten, so he did not join me for the main course, Lentejas Asturiana, a lentil stew with meat, from the Asturias region of northern Spain that was home to Mr. Fernandez, who opened the place in 1952, a year after I was born. 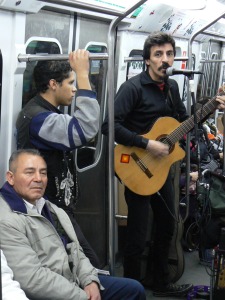 Busker on Line D of the Buenos Aires subway.

We left after nine, when the place was mostly filled up, walked north to Plaza Italia, and caught the subway back to the center. High point of the ride was a young troubadour on the train, singing and strumming and making jokes. Unlike a place like New York, riders were engaged and responsive. It is a city full of life. We walked back to the hotel. Juan peeled off, and I clocked out. A good day, for sure.

At 8:30 on Saturday the 8th, long-time ITBA and SABF friend Martín Siniawski and his girlfriend Valeria picked me up for a look-around. We motored west through Olivos, San Isidro, and other fancy neighborhoods along the estuary of the River Plate (Rio de la Plata), then out to the river’s delta at a place called Tigre, 20 miles from downtown. Tigre was an interesting place, known for lots of furniture makers and sellers, and the docks for boats headed into a maze of delta waterways. We ambled around for a bit, then hopped on a tour boat for a 90-minute cruise, past summer homes and year-round dwellings, a pleasant recreational landscape. We saw wooden ferries that were the buses of the delta, stopping here and there with passengers and their groceries and stuff. Elsewhere, two-person rowing shells, kayakers, and powerboaters. We sat atop the boat, in the fresh air, yakking and snapping pictures, for most of the ride. Motored back to town, stopping to pick up crustless sandwiches (called migas) at a bakery adjacent to their former high school.

Second homes along a delta canal

In the delta, this is the bus

The bakery around the corner from Martín's and Valeria's high school, home of the best migas (crustless sandwiches) in all of Argentina!

At 3:00 it was time for me to deliver the crisis-management workshop, followed by a good discussion, for about 20 of the conference organizers. At six we headed out to drop off the car (it belonged to Valeria’s parents). At that moment I slapped my forehead – I had forgotten to buy my favorite Argentine souvenir, dulce de leche (milk caramel, then best). We were seeking my favorite brand, La Salamandra, but the first place we visited did not carry it. We settled on another. Valeria joined us and we walked on. Happily, we passed another small supermarket that had the brand, so I bought another big jar, for a total of nearly four pounds of the gooey stuff. Should last ‘til Christmas!

Having traveled internationally for 40+ years, I’ve come to appreciate that one of the visitor’s greatest gifts is to be invited into the stranger’s house. “How do they live?” is on the minds of every curious traveler, and that night was filled with that present and many more. The students had organized an asado, a barbecue, at the home of Ivonne Meninato, one of the conference stalwarts. We were in the very comfortable Belgrano neighborhood, in a lovely house. I met Ivonne’s parents; her father was the head of Dow Chemical in Argentina, and they had a lot of experience in the U.S. I met Geronimo, their Labrador dog (and later handed a few morsels of meat).

And we had plenty of time to visit with current and former conference organizers, all my young Argentine friends. This is a bright and motivated group of kids, always a pleasure to talk with. The dinner rolled on for hours, as Emiliano, tending the fires, brought in waves of beef, chorizo, morcilla (blood sausage). There was plenty of beer, and just when we needed nada más, Georgina brought out an amazing cake layered with brownie, dulce de leche, and Italian meringue. Yow. Food coma. Oh, yes, almost forgot: the group presented me with a soccer jersey of the Argentine national team; on the back in the letters where the player’s name would be, it read “Gracias, Rob,” and was autographed by the organizers. It was a totally sweet gesture.

Driving home, I gave silent thanks to Don Miguel, the televised Spanish teacher from the early 1960s for whom (as I have written many times before) I credit for putting me in a place like Buenos Aires. What a gift.

The 2009 conference organizer, Matías Sulzberger, drove me to the airport the next morning. We had a great chat. Chatting the day before, he seemed enormously focused, and on the ride I came to understand a couple of the reasons for it. His grandfather fled Nazi Germany; his grandmother died when his dad was 11, and he was sent to live with an aunt in Buenos Aires. He had no money, but lots of drive, something he passed on to his son. It’s such a joy to get to know youngsters like that.

I’m still trying to figure out how to insert photos — which will be an essential part of my journal — but I have not succeeded. Stay tuned!